A Failure for the Flint Community 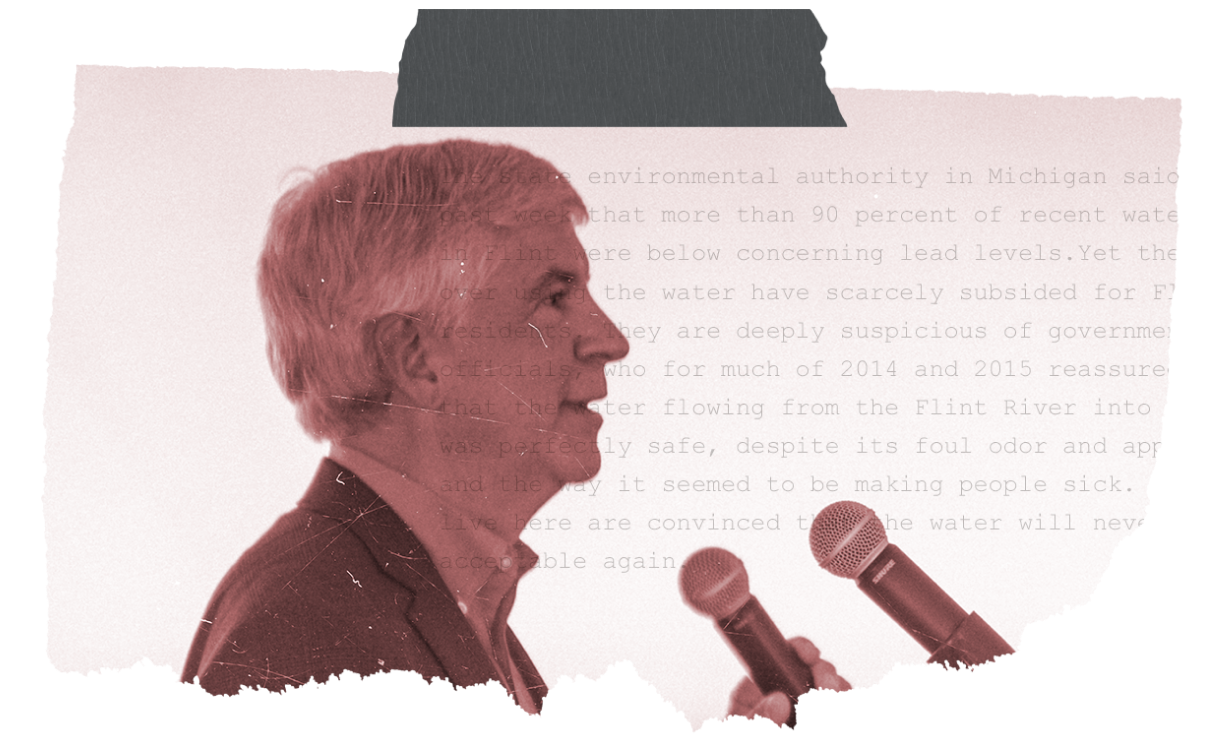 In September 2021, a state administration board approved a contract up to nearly $1.5 million for the legal defense of Rick Snyder on charges related to the Flint Water Crisis, and as of January 2021, in total, Michigan taxpayers have paid at least $27 million in legal defense fees related to this catastrophe. Meanwhile, government officials like Rick Snyder are hiding behind the Fifth amendment, refusing to share the truth about the Snyder administration’s role in this government-made disaster.

Career civil service ppl…made terrible decisions…we have to live with the consequences.

We’re poor. And because we don’t have anybody on our side that has any clout, Snyder didn’t care.

Rick Snyder’s policy record as governor explains his blatant disregard for the people of Flint throughout the Flint Water Crisis and his failure to act in a timely manner. Throughout his governorship, Rick Snyder repeatedly pushed policies that were harmful to minority and low-income communities. Here are several examples of Snyder’s policies that adversely impacted working-class families:

Governor Snyder appointed the Flint emergency managers between 2011 and 2015 – stripping the people of Flint of the ability to meet their City’s challenges themselves through their own elected leaders.

In a 2017 report, the Michigan Civil Rights Commission said that “systemic racism” played a significant role in the government’s poor response and disregard for the concerns of Flint residents, and agrees that “the absence of public input,” with regard to the Emergency Manager Law, “either directly or through officials they elected is a very significant violation of the principles of environmental justice” and that an emergency manager “from outside the community does not share the community’s interests, and may not even understand them or know what they are.”

The Commission concluded that “had the emergency manager law focused on the financial health of the city and the welfare of its residents, and not just on cost-cutting measures, and/or had it allowed for meaningful involvement of the community when it came to the very basic needs of life, clean water and clean air, this too could have served to mitigate or even prevent the water crisis.”

The commission believes that we have answered our initial question, ‘Was race a factor in the Flint Water Crisis?’ Our answer is an unreserved and undeniable — ‘yes’.

The Flint Water Crisis: Systemic Racism Through the Lens of Flint, Report of the Michigan Civil Rights Commission, February 17, 2017

Flint’s emergency managers, whose authority superseded that of local elected officials, made reckless decisions that helped bring on the Flint Water Crisis and make it worse.

Governor Snyder had complete power and authority to direct the Flint Emergency Managers to undertake actions that were necessary and proper to protect the health and safety of Flint residents and also had the power to remove the emergency managers from their position at any time – but failed to do so.

In October 2014, six months after the switch to the Flint River, the MDEQ sent Governor Snyder a “briefing paper” discussing various water quality issues and infrastructure problems in the City of Flint affecting their ability to distribute safe water. That same month, Governor Snyder sent his senior advisor, Valerie Brader, to meet with MDEQ officials about Flint’s water quality issues. Ms. Brader then emailed the Governor’s senior staff that the situation in Flint was “an urgent matter to fix,” and recommended an immediate return to Detroit Water.

Nevertheless, the City of Flint’s Emergency Manager, Gerald Ambrose, refused, citing costs. Governor Snyder had the power to overrule Ambrose and return to Detroit Water, but he took no action at the time.

Despite all of the warnings he received and concerns from Flint residents, Governor Snyder waited until October 8, 2015 — a full year after his staff made the recommendation to return to Detroit Water — to order the return to Lake Huron for drinking water by reconnecting to the Detroit Water and Sewer Department. When Governor Snyder made the order to switch back to Detroit Water, the change happened the very next day. That’s the kind of power that Governor Snyder had – and he failed to use it to protect the health and safety of the Flint community.

In June 2013, the MDEQ told the City of Flint it did not need to implement corrosion control at the time it switched to the Flint River. Nearly two years later, in February 2015, the MDEQ lied to the EPA telling it that Flint had a “corrosion control program” even though the MDEQ knew that was not true. It was not until August 2015 that the MDEQ changed its mind and directed the City to begin adding phosphates as a corrosion control measure to the water in Flint.

The Michigan Department of Health and Human Services (MDHHS) — the state agency responsible for ensuring public health in Michigan – hid important information related to the Flint Water Crisis from the public.

In the Fall of 2014, the MDHHS learned of serious health concerns occurring after, and as a result of, the water switch, namely an outbreak of legionella disease that appeared to be linked to the Flint River water. The MDHHS concealed this information from the public.